Clear and simple release notes template to inform your users 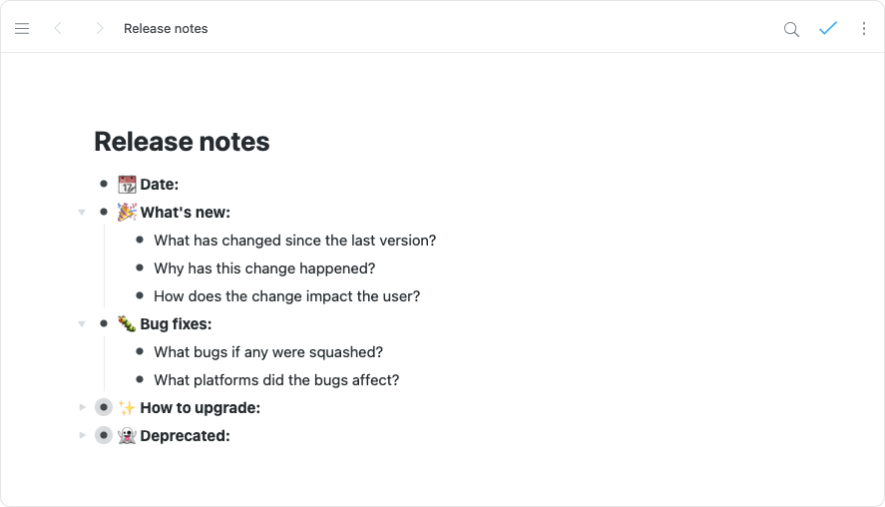 You must be logged in to copy a template

Release notes, far from being an afterthought after releasing changes, are an opportunity to let users know that your app has changed and how it could affect them.

It's important to keep your audience in mind when writing release notes. While most users won't read them, those that do take the time will appreciate your effort. Those that take the time to do so tend to be the more committed and enthusiastic users so a nod to them every now and then could go a long way.

Some important things to keep in mind when writing your notes:

How to use the template

The bullet journal template has two main sections, the calendar, and the monthly '⏳ Future' sections.

The calendar - A long list of months with each month containing the days for that month. You'll add your tasks, notes and events under each day.

The future logs - Each month has a '⏳ Future' section that serves as a placeholder for activities that should be completed during that month but do not yet have a specific date.

The monthly log allows you to view all the events for a given month. You create this view by clicking on the bullet for the current month and then clicking on the star ⭐️ to save that view in the left hand sidebar.

The daily log allows you to quickly jump to today and work on the day's tasks and events, and add notes. You create this view by searching for 'Today' in the menu bar and then clicking on the star ⭐️ to save that view in the left hand sidebar.

Map your customers as they interact with your product

As simple as paper.
Absurdly powerful.

Radical clarity and focus are only a signup away