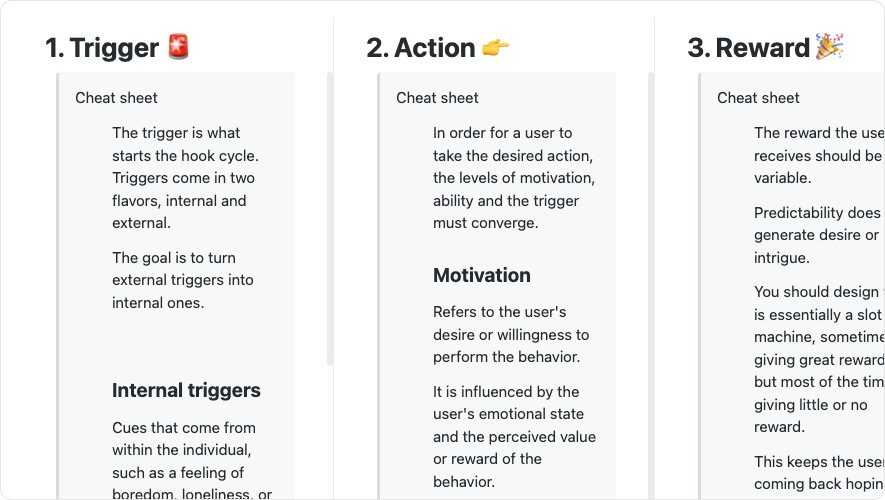 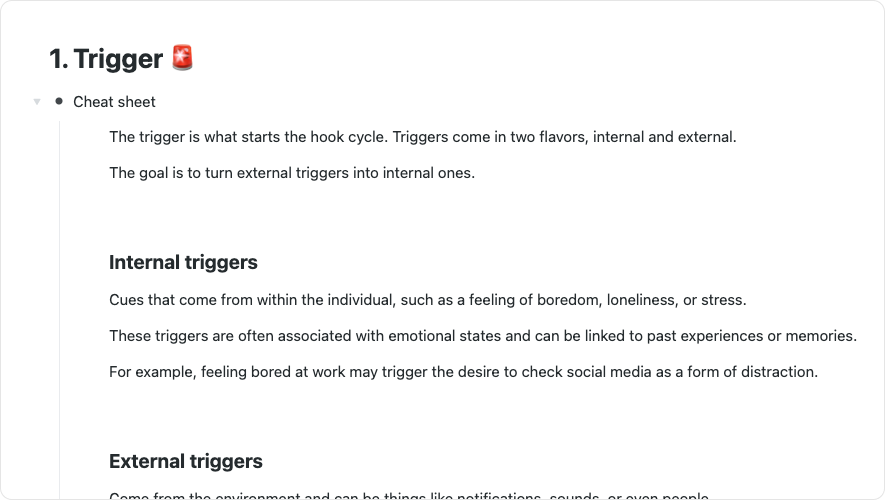 You must be logged in to copy a template

What is the Hooked Model?

‍
The Hook Model is a framework for understanding how new habits are formed. It consists of four key elements: a trigger, an action, a reward, and an investment. This model comes from Nir Eyal's 2013 book 'Hooked: How to Build Habit-Forming Products'. The model presents a four phase process to create 'hook cycles' that keep users coming back to your product or service

What are the hooked model phases?

‍
Trigger: The first step in the Hook Model is a trigger, which is a cue that initiates the behavior. Triggers can be internal (such as a feeling of boredom) or external (such as a notification on a phone).

Investment: The final step in the Hook Model is an investment, which is an action that improves the trigger-action-reward loop for the next time. This can include things like leaving the app open or setting a reminder for the next time.

‍
By understanding the elements of the Hook Model, it's possible to design products and services that create habit-forming experiences for users
To learn more about The hooked model, check out Nir Eyal's blog.

How to use the template

The bullet journal template has two main sections, the calendar, and the monthly '⏳ Future' sections.

The calendar - A long list of months with each month containing the days for that month. You'll add your tasks, notes and events under each day.

The future logs - Each month has a '⏳ Future' section that serves as a placeholder for activities that should be completed during that month but do not yet have a specific date.

The monthly log allows you to view all the events for a given month. You create this view by clicking on the bullet for the current month and then clicking on the star ⭐️ to save that view in the left hand sidebar.

The daily log allows you to quickly jump to today and work on the day's tasks and events, and add notes. You create this view by searching for 'Today' in the menu bar and then clicking on the star ⭐️ to save that view in the left hand sidebar.

Notion not working out for you? Use this simple template to switch to Workflowy.

Keep your users and internal stakeholders updated with this simple software release template.

As simple as paper.
Absurdly powerful.

Radical clarity and focus are only a signup away